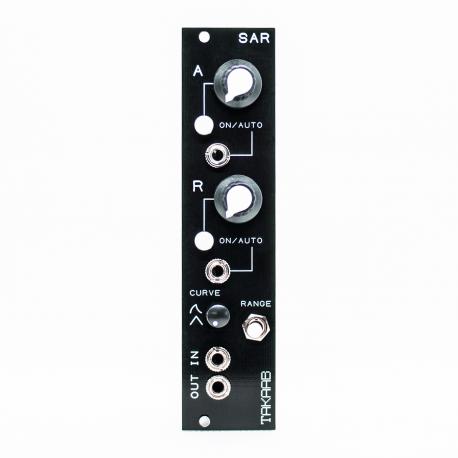 The Takaab S.A.R (Slide, Attack, Release) is a voltage lag generator designed primarily to function as either a portamento/slide circuit or an AR envelope generator.

With both the push switches out (ON) a voltage applied to the main input will be outputted with any rises or falls in voltage being slowed down dependant on where the A (attack/rise) and R (release/fall) knobs are set to. Therefore, inputting a 1v/oct control voltage will result in a portamento effect, whilst a smooth rising and falling envelope can be generated by inputting a gate.

With the switches pushed in (AUTO) the lag effect will be normally off and will be switched on whenever a gate signal is present at one or both of the adjacent jack inputs. - If a jack is only inserted into one of these inputs then any gate will affect both A and R. Plugging separate jacks into both the A and R inputs will give independent gate switching of each of these parameters.

The ‘Curve’ knob gives control over the curve of the lag, ranging from nearly linear to a logarithmic curve. It also somewhat effects the overall length, with the lag becoming a little longer the more curved it is.